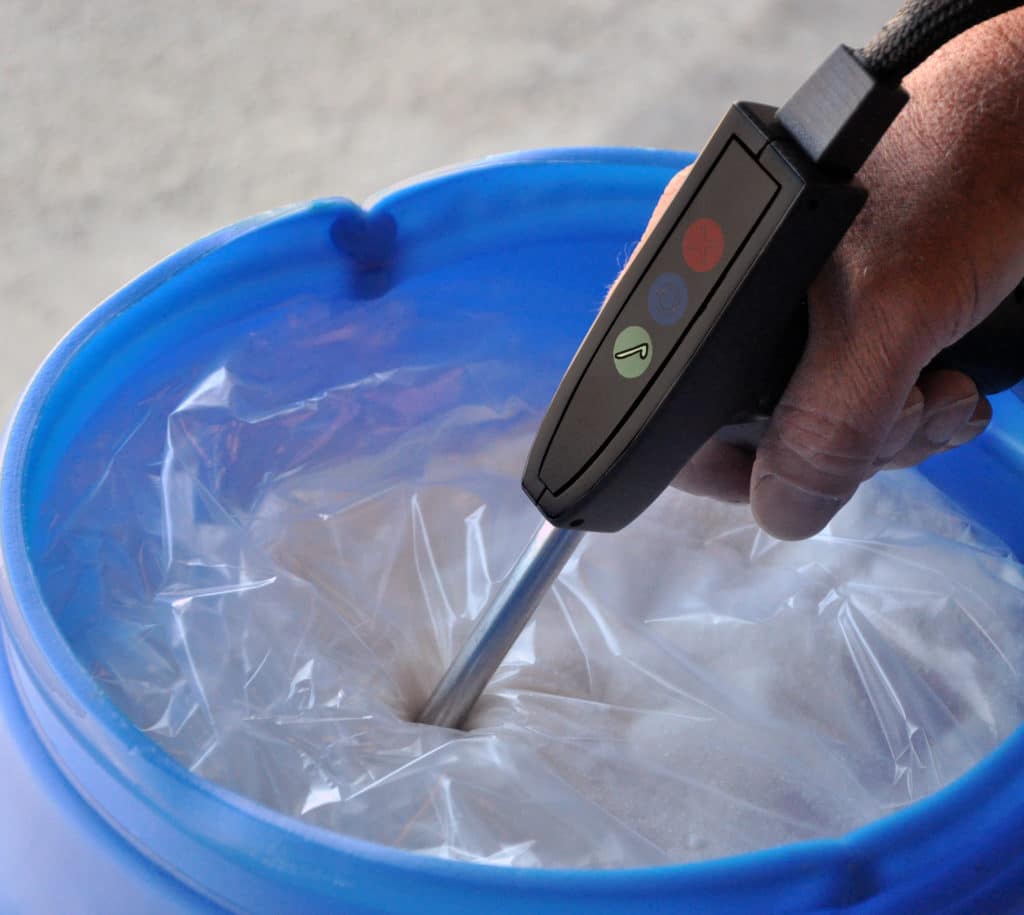 When raw materials are purchased it is critically important to verify that the correct materials have been received for quality, regulatory, and economic reasons.  Often these raw materials, such as food or pharmaceutical ingredients, are transported in plastic bags or paper packaging.  Packaging can be opened to perform a verification test using analytical techniques such as assays or infrared spectroscopy.  However, opening material packaging has several disadvantages:

A few technologies exist today that allow sampling of raw materials through their packaging.  For example, specialized Raman spectroscopy techniques can sometimes sample through semi-transparent packaging. However, Raman spectroscopy suffers from fluorescence interference, tends to have a small sampling area, can burn the sample or packaging, and is sometimes difficult to use as a quantitative technique, making it problematic for many applications.  Raw material identification using FT-NIR (near-infrared) spectroscopy holds promise for sampling through packaging and containers because it can penetrate several millimeters into a material, thus seeing the characteristics of both the packaging material and the sample inside the package. 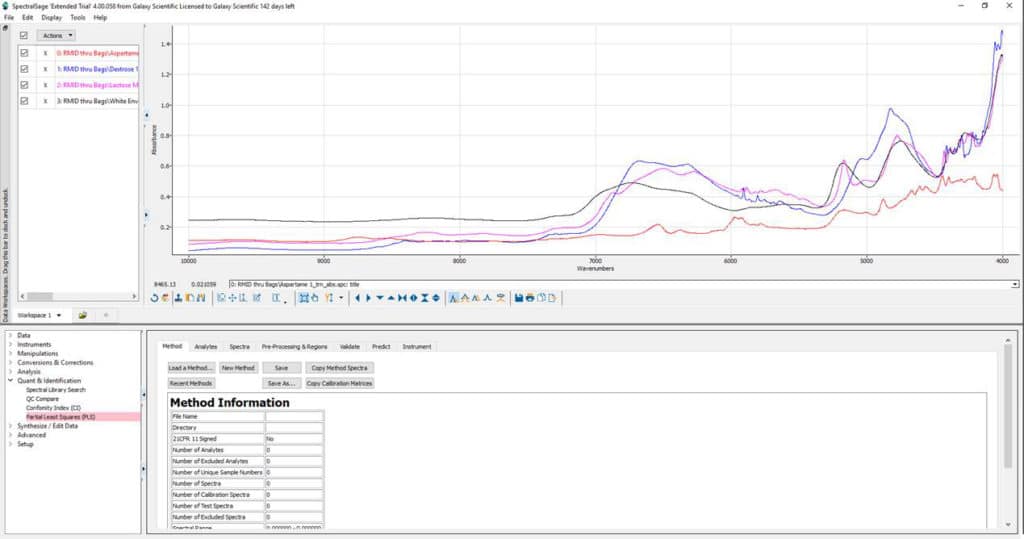 Therefore, the main challenge to using near-infrared spectroscopy is removing the contribution of the packaging from the total absorption spectrum.  Basic removal techniques like spectral subtraction may work under very controlled circumstances, but they are not sophisticated enough to deal with varying packaging thickness, scattering properties, additives in the packaging, and other variations in packaging and underlying raw materials, because they are subjective and require some level of operator expertise.  This problem can be complicated by the fact that some near-infrared spectrometers do not have the performance required to adequately resolve the absorbance peaks of the packaging and underlying material, making it difficult for an operator to judge how much to subtract.  For example, the C-H overtone band in dextrose at 5920 cm-1 is only about 10 cm-1 (3 nm) wide, which is outside the resolution of many near-infrared instruments. However, when modern Fourier Transform near-infrared (FT-NIR) Spectrometers, like Galaxy Scientific’s QuasIR™ series, are coupled with novel chemometric techniques, such as Galaxy Scientific’s Advanced-ID™ algorithm, identification of materials through packaging becomes achievable. To illustrate the real-world utility of this technique an experiment was set up to analyze several raw materials inside various forms of packaging.

Three basic samples were obtained from local sources to represent incoming raw materials:  lactose, a sugar present in milk; dextrose, the naturally occurring form of glucose; and aspartame, an artificial sweetener.  These samples were are fine, white powders that are nearly identical to the naked eye. 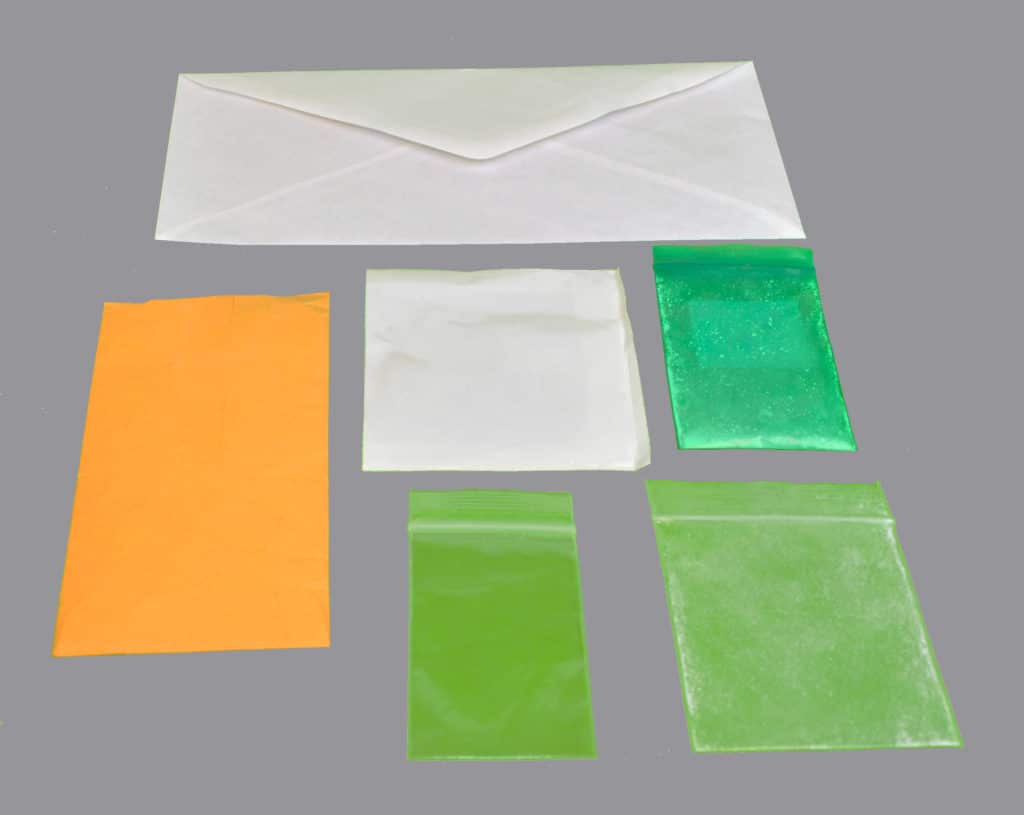 Figure 2: Containers used for the experiment.

FT-NIR spectra were collected using a QuasIR™ 2000 spectrometer (Galaxy Scientific, Nashua, NH, USA) equipped with a diffuse reflectance fiber optic probe. The diffuse reflectance probe was held upward using a versatile probe stand and the samples were placed on top of the probe tip for measurement. Each sample was measured at 4 cm-1 resolution and 32 scans were averaged. Three measurements were taken of each raw material, the package without raw material in it, and the package with the raw material. Samples were moved on the probe between each measurement.  Figure 3 shows an example of the sampling configuration.

Spectral Sage™ software was used for data collection and the Advanced-ID™ algorithm and software were used for analysis. All of the pure packaging spectra were included in the analysis.  The spectral range was limited to 4100-6800 cm-1 since that was the region where most of the spectral differences were present. 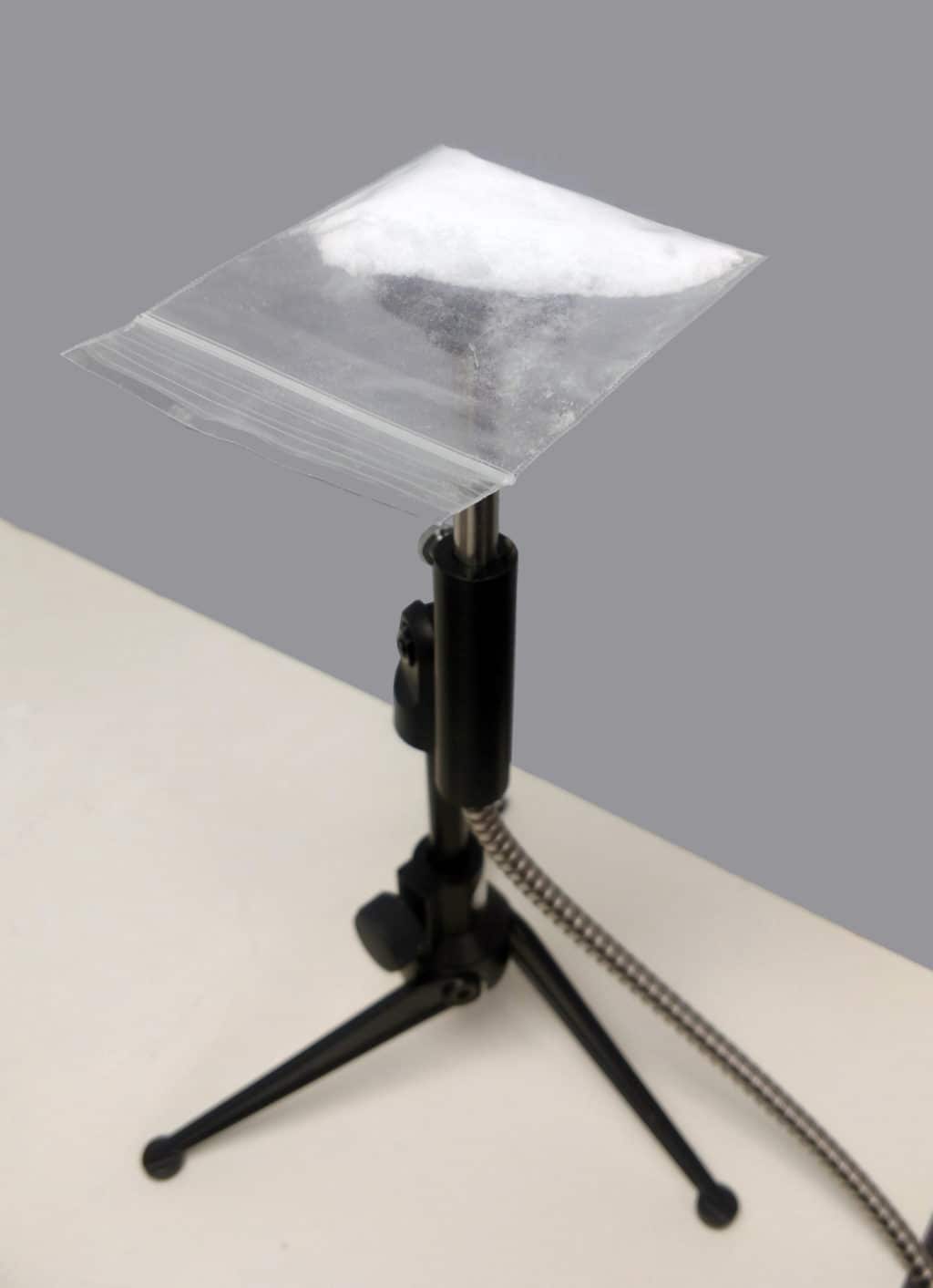 Collecting near-infrared spectra of materials through packaging can be challenging because the packaging can often contribute significantly to the resulting absorption spectrum. There are two main reasons for this. First, many packaging materials are made from plastic or paper which have significant absorption bands in the near-infrared. For example, polyethylene has strong absorption bands in the C-H stretching overtone region around 5500-6250 cm-1 (16001800 nm).  Second, the scattering properties of the packaging and the material behind it, as well as the fact that the light must go through the packaging twice to return to the optical probe, means the effective path through the packaging may be large compared to the path in the material behind it. Figure 6 illustrates this difficulty. The green spectrum shows the result of sampling aspartame though a manila envelope. The spectrum looks nearly identical to the spectrum shown in magenta, which is the spectrum of an empty manila envelope. It’s nearly impossible to distinguish by eye the aspartame present in the spectrum (blue).  When a simple correlation algorithm or other common spectral matching technique is used to compare the sample spectrum to the pure material spectrum, the results are obviously poor. 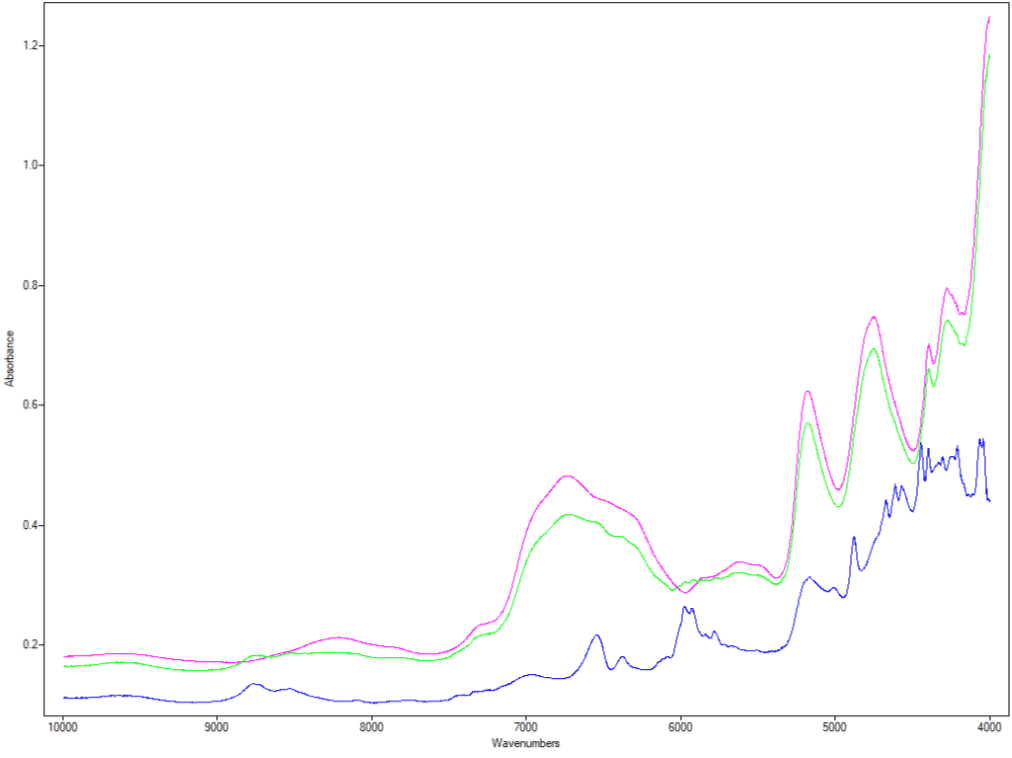 Figure 7: An example extracted spectrum from aspartame through a manila envelope (blue) produced by Advanced-ID can be compared to pure aspartame (red) and dextrose (magenta). 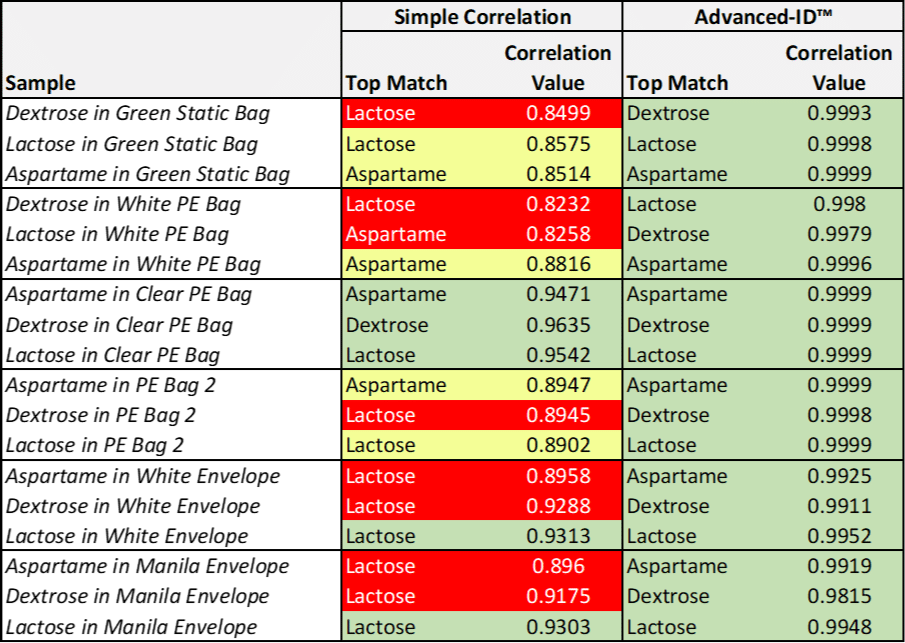 Table 1: Comparison of results of simple correlation to the Advanced-ID method where the extracted spectrum ,(after packaging removal), is correlated to the pure material spectra

While subtracting the packaging spectrum from the original sample spectrum might slightly improve the results of the simple correlation method, it would require advanced information about which packaging material was present.  Even then, it would still be much less effective than Advanced-ID™ due to variation in the packaging thickness and other inconsistencies. As already noted, manual subtraction is also subjective and relies on operator skill.

It should be noted that Advanced-ID™ requires spectra of the packaging to be available in order to perform the least-squares regression and produce the extracted spectrum.  However, the packaging does not need to be exactly the same as that used with the sample.  To demonstrate this, the packaging material used in the “PE Bag 2” samples was not included in the library of potential packaging materials.  Since the other packaging materials were made of polyethylene, they were able to be fitted to the sample spectrum and removed successfully in spite of any differences in the material thickness or composition. The correlation coefficients from this set of data were only slightly lower than correlation coefficients from the “Clear PE bag” data set where the packaging spectra was included in the packaging library.  The analysis was still successful because the least-squares fitting allows for variation in the packaging spectra that makes up for differences in packaging thickness or subtle variations in material.  This shows that only a relatively small library of packaging spectra are needed to make the algorithm work well. 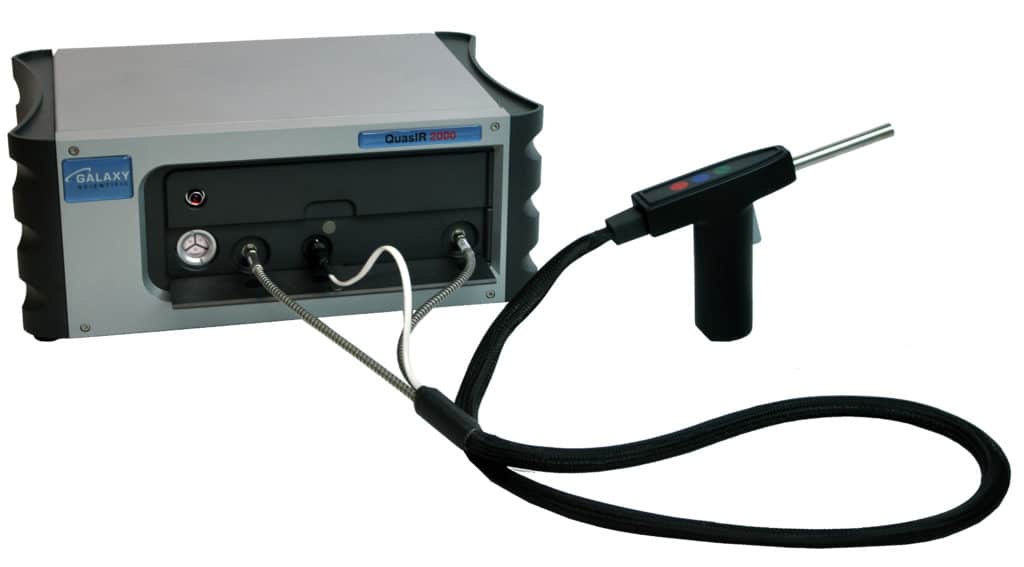